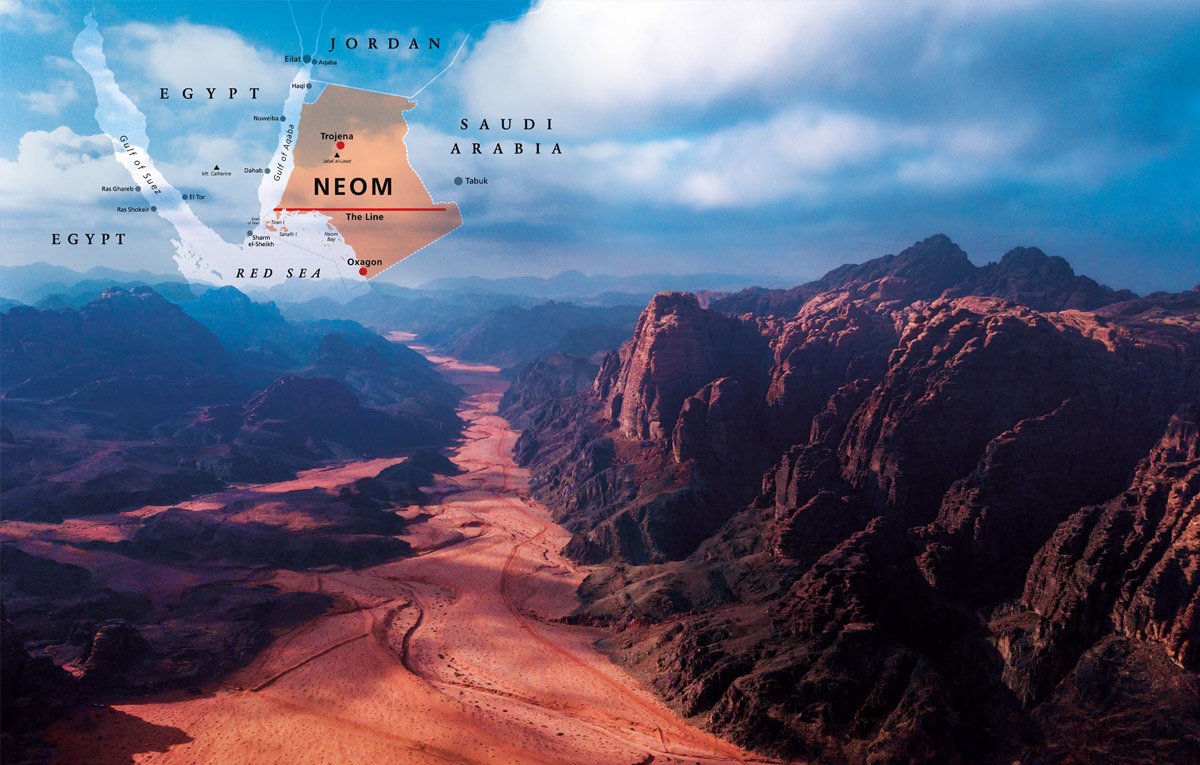 One of the world’s largest construction projects is currently underway in Saudi Arabia near the northern end of the Red Sea. It is the future site of Neom, an ambitiously futuristic city planned to cover a total area of 26,500 km2 – more than twice the New York metropolitan area.

Still mostly on the drawing board, Neom is planned to comprise various high-profile regions, each catering to different needs. By late 2022, the plans for four regions have been publicized. Sindalah, a luxury island resort on the Red Sea, is expected to be the first physical showcase of Neom, scheduled to open in early 2024. Trojena will be a mountain destination for year-round skiing, while Oxagon is going to be a coastal clean industry hub.

The region that has attracted the most press coverage and provoked discussion worldwide, is called The Line. It is planned to consist of a single structure that is 500 m tall, 200 m wide – and no less than 170 km long, stretching from the Red Sea coast deep into the desert.

The Line is planned to house nine million residents, all with access to their basic services within a five-minute walking distance. Eliminating the need for cars, it is planned to use high-speed trains for transport within the city.

The transport system of The Line will consist of two separate railroads: one for the high-speed passenger trains and the other for freight services. The rail system will require the excavation of some 28 km of tunnels.

The tunnel construction bid was won by the Korean consortium of Hyundai E&C and Samsung C&T. The value of the order is estimated at no less than US$1 billion.

In the summer of 2022, the bidding for jumbo drilling and rock tools in the tunnel project was won by Jinyang R&S, one of the largest jumbo drill rental companies in Korea. Jinyang manages some 35 jumbo drill units, renting them with operators to tunneling and mining sites, mostly within South Korea.

Rock tools for the tunnel jumbos will be supplied by Robit. Since their distribution deal struck in 2017, Robit has supplied Jinyang with rock tools for several domestic job sites in Korea; the Neom deal, however, is unprecedented in scope.

“This is a huge project and a major deal for Robit for the coming years”, says Sales Manager Sunyong Choi of Robit.

Top Hammer Drilling | browse products
Contact us
How can we serve You?