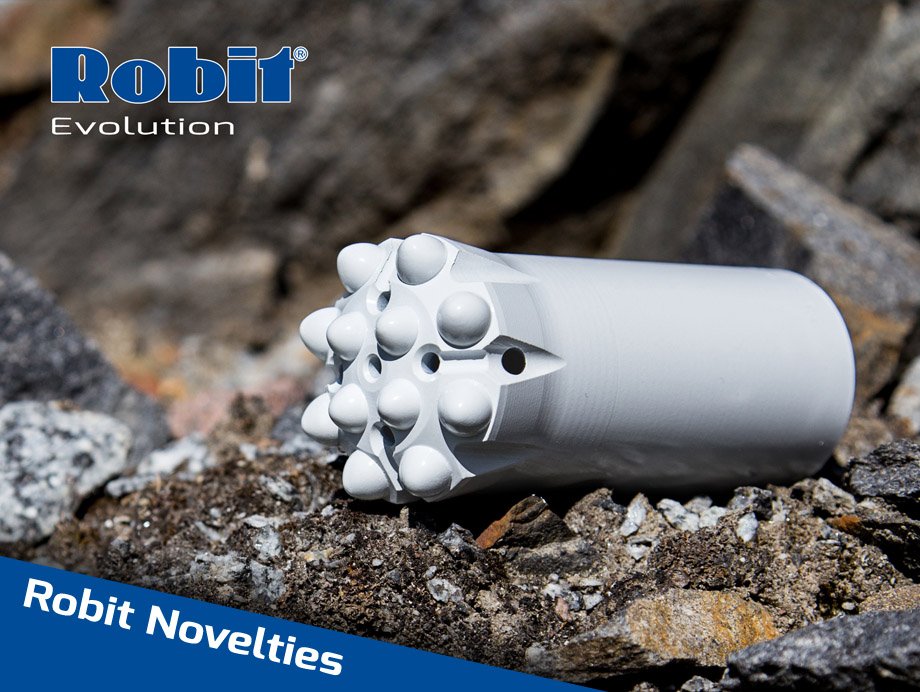 The 30-year history of Robit has only seen one thing constant – the ever-increasing need for the connection between hammer and rock to endure more severe forces. In recent years, top hammer performance development has not only been linear but exponential, as maximum impact powers in e.g. tunneling and drifting applications rise above 40 kW and impact frequencies steadily reach beyond 100 Hz. The Robit Button Bits, now used across the globe in a vast variety of rock formations, have witnessed masses of improvements during the journey. We’ve listened to our most experienced customers working in the toughest conditions, tested again and again, failed and succeeded, tweaked and reinvented, all the time working on what matters most – getting drilling right, every time.

The Evolution bit series is the result of a systematic approach towards crafting the world’s best button bits. Our level of sophistication is growing, trial and error has ages ago been surpassed by simulation and analytics based development. We know how our materials behave, how rock fractures, how to harness the immense forces traveling within the drill string. The best part of this is the quantifiability, the simple microstructure that makes itself visible after asking so many questions. We have the answers to where the Evolution performance comes from and what it means to your drilling process.

The Evolution series scope of improvements share multiple aspects across the size range, drawing from the simulation and analytics based approach exemplified by advanced fluid dynamic simulation being used among other tools.

In the small end, development focused especially on the specific needs of high power and high frequency drilling in tunneling and drifting applications. Multiple model approaches were taken, with the boldest design boasting just 6 extra-large buttons in a 48-mm bit. All variants were extensively tested with our customers and set against conventional hard rock bits. In the end the best results were gleaned from modifications and optimization to face design, but particularly from increasing both gauge and face button numbers as well as increasing the number of flushing holes. The test results of the Evolution bit in hard Scandinavian granite were very impressive, with grinding intervals up to 60 % longer and lifetime 20 % higher compared to conventional hard rock button bits.

In the medium to large sizes significant performance strides were taken by diving deep into flushing properties. Here in particular, the computational fluid dynamics (CFD) simulations proved their strong added value as they drove the pre-test phase for fast finding of optimal solutions and truly significant impacts. The 76-mm Retrac button bit, presented in pictures 2 and 3, superbly exemplifies the new design aspects. The Retrac body itself has the signature Robit curving grooves and the sleek geometry flows through to the new face design. The simulations clearly show that the new model isn’t just easy on the eye. The flow pattern is more even, which reduces bit erosion. The pressure distribution is more uniform, and the smoother side channels along larger main grooves increase airflow ensuring efficient flushing. Dead-space across the face is significantly cut by introducing an extra flushing hole in the middle, clearing the center area better of cuttings.

All in all, field tests confirmed what the technical simulation background work had already proven. Our partner drillers were happy with the excellent performance and noted better flushing and longer grinding intervals. Across sizes, the Evolution designs have systematically excelled. The 102-mm bits were tested in extremely hard and abrasive rock formations in Pennsylvania, USA, where we had been facing a common challenge with a customer to find the perfect bit for those conditions. The new formula allowed us to out-perform competition and more than double our achieved meters compared to our previous model.

Considering all the above, it is safe to say the reality of drilling has not changed.  We are going deeper with more speed and force, driving the development of the entire drilling consumables industry. As an established global company, we continuously need to reinvent ourselves. Across the globe our cases are more versatile, our knowledge base wider, our questions and tools for finding answers smarter. We want to show we are better than anyone else and explain why. In the end, we fight hard every day to be the strongest and smartest when it comes to the space between drill and rock. That is the spirit of Robit Evolution.