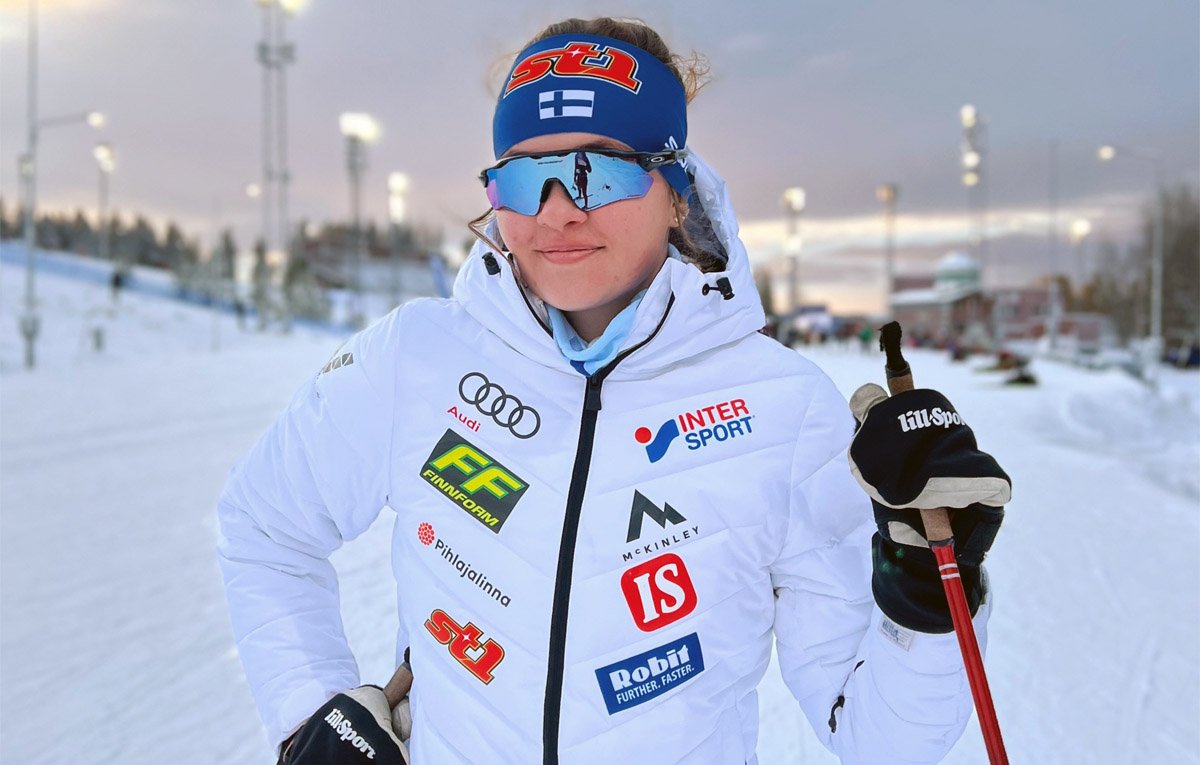 Hilla Niemelä is one of the rising young stars in Finnish skiing. A corporate supporter of sports, Robit signed a sponsorship and cooperation agreement with Hilla in late summer 2021.

The collaboration between Robit and Hilla is based on shared values and jointly produced media content that gives glimpses into Hilla’s training, racing career, goals, current affairs and future expectations. Hilla put the season opening update together:

The season has now progressed to the point that it is time for a little Christmas holiday. While this won’t really be a break from exercise, I will still have time to relax and recover at home and to prepare for my main objective for this season.

In May, I had to put practice on the backburner, when studying for the university entrance exams required a lot of energy. I did train even then, but in freeform, completely without a program and without stress. That same month, I also moved officially to Tampere, which has felt like the right choice ever since.

With the entrance exams over in June, I headed to Otepää for a training camp with my skiing club. And at the end of the month, I had this training season’s first U23 (Under 23) national training camp.

In July, I clocked over 100 hours of training. I had plenty of successful practice sets and even managed to break a few personal records during the test in the final days, despite considerable stress from all the training.

At the beginning of August, I attended yet another camp in Vuokatti, together with the U23 group. During that month, I also finally started my studies at Tampere University. All the studying for the entrance exams in the spring bore fruit as I managed to secure a study place, and now I am studying environment and biotechnology while training and competing.

I attended university regularly in September and October, but also managed to train a fair bit. At the end of October, I had a snow camp in Vuokatti and started accumulating the first skiing kilometers on snow.

November arrived with the start of the competition season at the Finnish Cup in Vuokatti. I got up to a good speed on both competition days and it started becoming evident that I was in good condition for competitions. The first races of the season have always been a bit more difficult for me, but I continued with a good flow at Olos the following weekend. Success at the high-level, traditional-style race on 10-kilometer distance guaranteed me a spot representing at the World Cup in Ruka. In a race in Taivalkoski, one week after Olos, I secured a spot for the sprint race in Ruka as well.

My first World Cup weekend started well, and I made it all the way to the Quarter Finals, finishing as 25th. I was also happy with my results in the 10-kilometer traditional race in Ruka. These successes gave me the opportunity to participate in the World Cup in Lillehammer in the 20-kilometer, traditional-style mass-start race. I had a couple of peaceful days at home after Ruka, before heading off to Lillehammer, where I had a clean race and loads of great experience. In the final listings I was 37th.

Having participated in races five weekends in a row, I was in dire need of a training break after Lillehammer. For me, this means a weekend without a race to attend to. After the training break I headed to Östersund for Scandinavia Cup, which is in practice a B-Class World Cup. I reached the 6th place in the qualification round of the traditional-style sprint, meaning that in the Quarter Finals I was up against the Olympic winner of last winter’s sprint, among others. High performance in the Quarter Finals netted me a spot in the Semi Finals with a lucky loser time, and there I achieved the 11th place in the final rankings.

Now I have some time to rest and recover again, gaining some energy from Christmas food. The next important races are in January of 2023. The plan is to head over to the United States at the start of January, in order to participate in the Winter Universiade, or the World Championship for students, in Lake Placid. The competitions will run for a couple of weeks, after which I will transfer from the US directly to Canada. This is where my main competition for the season, the U23 World Championship, will be held. I am now in a better condition than ever before and I am eagerly looking forward to finding out, just how far that will get me this year.